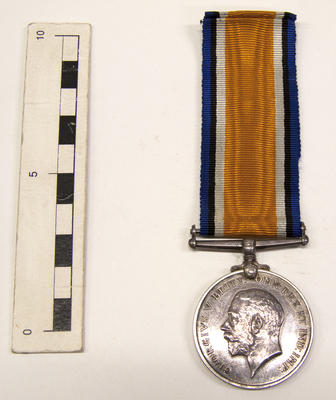 Production date
1919
Description
A British War Medal commemorating service in World War One. The medal is silver and circular with a silver bar. The obverse of the medal shows the uncrowned left facing profile of King George V. Around the edge of the medal is embossed " GEORGIVS V BRITT: OMN" REX ET IND: IMP: " The reverse of the medal depicts St. George trampling underfoot the eagle shied of the Central Powers, as well as a skull and crossbones. " 1914 / 1918 " are embossed above the mounted figure. The ribbon has an orange watered centre, with thin stripes of white and black at each side, and borders of royal blue. Engraved along the edge of the medal is " 22/150 / SISTER M.A. MUIR / N.Z.E.F ".
See full details

In 1915 Mary joined the New Zealand Expeditionary Force Nursing Service, and embarked on the hospital ship Maheno. Her time at war was distinguished and busy. She was returned home with typhoid in 1916, served on the Marama hospital ship in Alexandria, was Sister in Charge of Ward 8 at the Walton-on-Thames New Zealand General Hospital, and served on the front at the New Zealand Stationary Hospital at Amiens, about 24 kilometres from the front line. Mary suffered terribly from trench foot, but after the Armistice was chosen to meet the Queen - which meant her feet were treated! This medal was awarded to Mary in recognition of her war service.