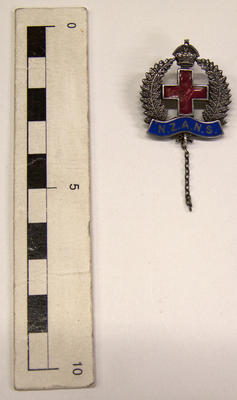 Production date
1918
Description
A sterling silver badge awarded to Sister Mary Muir for her involvement in the New Zealand Army Nursing Service. The badge has two ferns forming the edges of the badge, topped by a crown. The base of the medal is a blue enamel banner edged in silver. On the blue banner are letters in silver " N.Z.A.N.S. ". In the centre of the badge connected to the ferns, the crown and the banner is a red enamel cross edged in silver. On the reverse of the badge is engraved " 812 " , a makers mark and " STG SILVER ". At the bottom of the badge is a small metal loop with a small piece of chain attached.
See full details

In 1915 Mary joined the New Zealand Expeditionary Force Nursing Service where she received this badge, and embarked on the hospital ship Maheno. Her time at war was distinguished and busy. She was returned home with typhoid in 1916, served on the Marama hospital ship in Alexandria, was Sister in Charge of Ward 8 at the Walton-on-Thames New Zealand General Hospital, and served on the front at the New Zealand Stationary Hospital at Amiens, about 24 kilometres from the front line. Mary suffered terribly from trench foot, but after the Armistice was chosen to meet the Queen - which meant her feet were treated!