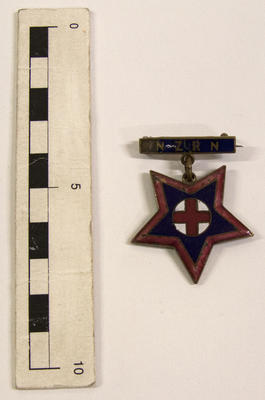 Production date
1909
Description
A star shaped New Zealand Registered Nurse badge with bar and pin. The star has a red border with a blue centre, and a red cross situated in a white centre in the middle of the star. The bar is connected to the star badge by a metal ring, and on the bar is blue enamel with brass letters " N Z R N ". The reverse of the badge is bronze with engraved markings " 812 / MARY MUIR / New Plymouth Hosp. / 1909 ".
See full details

Credit line
Sister Mary Muir was a woman who knew how to keep busy. She grew up in South Taranaki, and began her nursing career the Hawera District Hospital. After graduating as a registered nurse from the New Plymouth Public Hospital, where she would have been given this badge, and working in Manaia, she studied in Melbourne and returned to be the district nurse of Opunake. Her parents farmed around Oaonui, and it's likely she was a well known member of the community.

In 1915 Mary joined the New Zealand Expeditionary Force Nursing Service, and embarked on the hospital ship Maheno. Her time at war was distinguished and busy. She was returned home with typhoid in 1916, served on the Marama hospital ship in Alexandria, was Sister in Charge of Ward 8 at the Walton-on-Thames New Zealand General Hospital, and served on the front at the New Zealand Stationary Hospital at Amiens, about 24 kilometres from the front line. Mary suffered terribly from trench foot, but after the Armistice was chosen to meet the Queen - which meant her feet were treated!