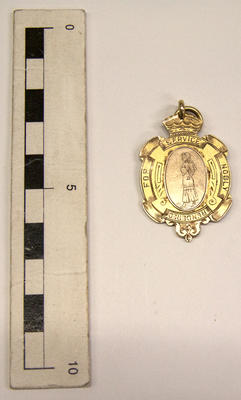 Description
A gold plated commemorative medal, awarded to Sister Mary Muir. The medal is shield shaped with a gold ring through a loop at the top of the shield for a chain to be fed through. The front of the shield has text engraved around its edge stating " FOR SERVICE NOBLY RENDERED ". In the centre of the medal on a more silver panel is an engraved image of a nurse in a long uniform and nurse's cape. On the reverse of the medal is an engraved dedication to Mary Muir, reading " A TOKEN OF HONOUR / TO / SISTER MUIR / FROM / Oaonui Residents / GREAT WAR / 1914 - 1918 ". Beneath this engraving is a small indented panel which has the engraving ' W J WESNEY ' who is the jeweller who made this piece. Below the maker's mark is a small indented section with the inscription " 15 CT ".
See full details

Credit line
Sister Mary Muir was a woman who knew how to keep busy. She grew up in South Taranaki, and began her nursing career the Hawera District Hospital. After graduating as a registered nurse from the New Plymouth Public Hospital and working in Manaia, she studied in Melbourne and returned to be the district nurse of Opunake. Her parents farmed around Oaonui, and it's likely she was a well known member of the community.

In 1915 Mary joined the New Zealand Expeditionary Force Nursing Service, and embarked on the hospital ship Maheno. Her war service was distinguished and busy. She was returned home with typhoid in 1916, served on the Marama hospital ship in Alexandria, was Sister in Charge of Ward 8 at the Walton-on-Thames New Zealand General Hospital, and served on the front at the New Zealand Stationary Hospital at Amiens, about 24 kilometres from the front line. Mary suffered terribly from trench foot, but after the Armistice was chosen to meet the Queen - which meant her feet were treated!

Mary returned to Taranaki in early 1919, and this medal was presented to her by the residents of Oaonui sometime after that, in recognition of her efforts at war. After some time as the assistant matron at a private hospital in New Plymouth, she and her sister Catherine, also a nurse, set up the Iona Private Hospital on Young Street, New Plymouth. Mary and Catherine ran the hospital until 1943, when they and their sister Jessica retired to Auckland. They still made regular trips to New Plymouth after their retirement, setting up a timetable for family members to visit them!