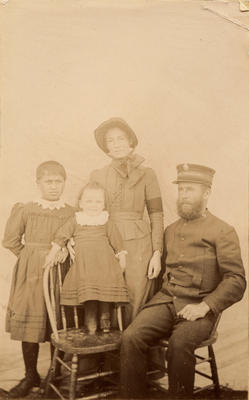 Description
Photograph album with brown and gold embossed cover. The album has 13 pages and contains 72 photographs, the majority of which are albumen carte de visites. There are also three cabinet cards, one tintype, and a small number of printing-out paper prints. The majority of the carte de visites were made in New Plymouth by W.A. Collis, H.Webster, Hoby or T.S. Muir, although a small number were made by photography studios elsewhere including Melbourne, Cape Town, London and Paris. Several of the photographs have been hand-tinted.

Very few of the photographs are annotated. Those that are include the names John Rowe, Miss Jessie North[illegible], 'Counsin Jane', W. M. Lunley, Mrs Judge (later Gawler), Reverend Spicer, Harry Hones and Archdeacon Govett. The name Arthur Callaghan is written in the album twice, independantly from any photographs. Pug dogs also feature in two of the photographs. One photograph of particular note shows an unidentified man wearing a 'Te Ope Whakaora' (Salvation Army Maori Mission) hat and seated with a Pakeha woman and toddler along with a young Maori girl.

The pages in the back half of the album have been glued together and hollowed out to accommodate a music box mechanism that has been secured to the inside back cover.
See full details