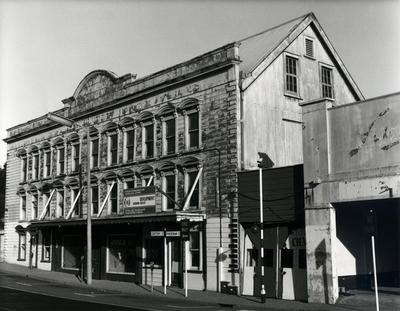 Production date
1986-1987
Description
Collection of two colour photographs and four black and white photographs depicting the refurbishment of the Egmont Steam Flour Mill building at the junction of Courtenay and Powderham Streets. The photographs show the interior and exterior of the building at different stages of renovation, including contractors working.

The Egmont Steam Flour Mill building was built in 1865-67 for Mssrs Webster and Hulke. It is the only surviving flour mill and also the oldest industrial building in New Plymouth. George Robinson was the architect, with designs supplied by Mssrs Bull and Bond, England.

The building operated as a mill until at least 1896, after which is was owned by produce merchantes Collet and Co. From 1928-65 it was adapted for use as a shop by the Farmers Co-Op, after which it began to deteriorate. The building underwent major conservation work in 1986-87, reopening as a bar and restaurant known as 'The Mill'. It was vacated in 2010.
See full details