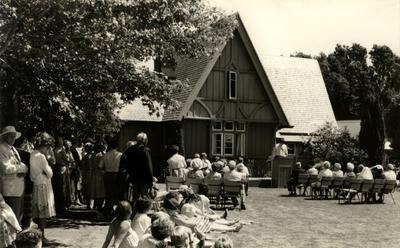 Production date
Nov 1985
Description
The official opening of the Gables Colonial Hospital as a Taranaki Society of Arts gallery in November 1985. There is a crowd of people in front of the Gables building. Some of them are seated in rows directly in front of the building while others are standing under the trees or sitting on the lawn on the left. A man is speaking at a rostrum.

The Gables Colonial Hospital is a Category 1 rated New Zealand Historic Places Trust building. It was originally located on the north bank of the Henui stream and opened in September 1848. It was converted into a home for elderly men in 1880 and was closed in 1903. The building was then purchased by Mrs Mary King and moved to it's present site in Brooklands Park. It was gifted to the city after her death in 1934 and was privately leased until 1983. It then opened as an arts centre after a two-year restoration.
See full details