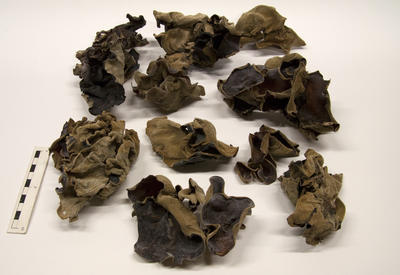 Description
12 pieces of dried wood ear fungus. The underside of each piece of fungus is pale brown and slightly furry. Some pieces have raised veins on the underside. The top side of the fungus is darker brown and smooth. Some pieces have a more reddish tinge, whereas some are more of a blue-grey in colour. Many of the pieces have specks of dirt on the surface or remnants of wood from where the fungi were removed from the trees they were growing on.
See full details

Credit line
When is wool not really wool? When it's Taranaki wool, of course! Also known as Jew's ear, mouse ear and various other poetic names, wood ear fungus was a lifesaver for Taranaki farmers struggling to get their dairy farms to make a profit. Wood ear fungus, or auricularia cornea, grows on dead and decaying trees, and was very common on felled logs around the newly cleared pastures on Taranaki in the mid to late 19th century. Chew Chong (Chau Tseung) arrived in Taranaki in 1870, and recognised this fungus as a prized gourmet and medicinal food in China, and he began purchasing the fungus off farmers and selling it back to China. The fungus was collected by both Maori and Pakeha, and was a blessing for struggling farmers as it provided them with a much needed source of income which could be collected by their wives and children.It helped Taranki dairy farmers with much needed incomes while they slowly got their dairy farms running profitably. Exports to China slowed and eventually ceased by 1960, when Taiwanese growers were able to grow large quantities on sawdust rather than relying on wild picked fungus, but the fungus can still be found in the wild in Taranaki today.