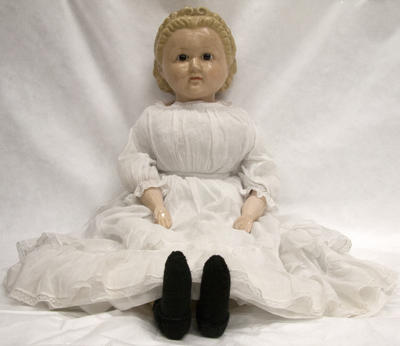 Production date
Circa 1840s
Description
A wax headed doll. The doll has a papier mache head covered with hard wax, with blonde curled hair and a dark brown headband, all in wax. One eye appears to be original wax, the other has been replaced due to damage and may be glass instead. The doll has red lips which have faded over time. The wax extends down her sternum. Her legs and arms are made of heavy ceramic. She is wearing a full length white dress with lace around the neck and slightly puffed sleeves. She wears nude stockings and small black felt boots.
See full details

Credit line
Pansy has had a long and interesting history, which has taken her from one side of the world to the other. Pansy is likely to be a Georgian wax over papier mache doll, a style of doll popular in the first quarter of the 19th century. Wax was poured over a papier mache base, giving Pansy her distinctive moulded hair and lustrous skin. Pansy left her home of England in 1841 along with the Hamblyn family - mother Mary, father Charles, and their four children, on board the Amelia Thompson, bound for New Plymouth. Pansy was a gift to the family from friends on their departure from England. The long journey may have caused Pansy a bit of damage - the back of her head is sunken, and it has been speculated that this may have been due to the wax melting as the Amelia Thompson passed through the tropics. Whatever the reason, Pansy survived the journey although she was not quite unscathed! Once she arrived safely in New Zealand, Pansy was passed down through many generations of the Hamblyn family, down the female line. She was always very well looked after by those entrusted with her care, and Annabel Rayner, Pansy's last caregiver, remembers her being stored carefully in a child-sized rocking chair in her grandmother's front room. She was certainly not for playing with, but the grandchildren were allowed to look at her and on occasion hold her very carefully! However at some point a curious child, in the generation before Annabel remembers visiting the doll, just couldn't help themselves any longer and climbed up to get a closer look at Pansy - but was a little too curious for poor Pansy, resulting in her having an eye poked in! However, her eye was replaced and she remains a beautiful and serene doll, and a reminder of the Hamblyn's arduous journey to their new life in New Plymouth.