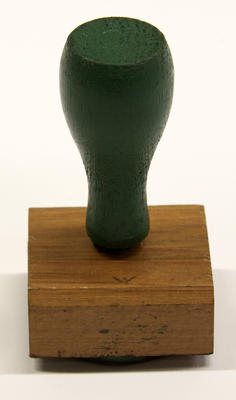 Production date
1986
Description
A wooden stamp used for the Sinfull Un-Opening in 1986. The stamp is made from wood with the shape of the stamp in dark green rubber. The handle of the stamp is painted green. The stamp itself has a cartoon elephant with the words " SINFULL UN-OPENING / MOTUNUI / FEB. 1986 ". The stamp shows ink stains as a sign of wear. There is a faded small arrow in ballpoint pen on the top of the stamp's base, showing the user which way to press the stamp down.
See full details

Credit line
Opened in 1986, the Motunui Synthetic Fuels Plant was the world's largest methanol production facility. When it was first opened, the Synfuel plant took natural gas from both the offshore Maui, and the onshore Kapuni, gas fields and converted the combined gas feed first to methanol, and then to synthetic gasoline via the Mobil Methanol-to-gasoline (MTG) process, with the unleaded gasoline produced used directly in transport fuels. The opening of this site was seen as a significant shift from the situation in the 1980s, where New Zealand was heavily dependant on foreign oil, and there was much excitement from some parts of the community about the potential for growing employment in the region.

However, the opening of the plant was not universally applauded. The potential for environmental disaster and destruction of natural resources and landscapes led to protests from local community groups, including Gill Winter's father in law, Peter Winter. This stamp was used as part of one of the many events speaking against the opening of the plant, the "Sin-Full Unopening", which happened the night before the official opening of the plant. This stamp was used on the invitations to the Unopening event, as well a to stamp letters sent to cancel the official opening!