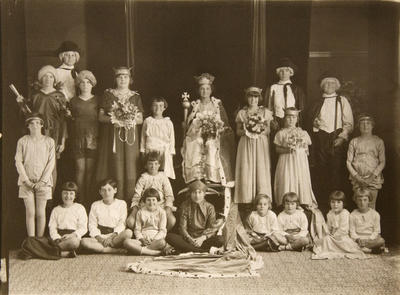 Production date
1927
Description
Formal group portrait of of 21 children dressed in costumes for the 1927 West End School Queen Carnival. The Carnival was held to raise funds for a new school playground, after the school was relocated to its current site on Bonithon Avenue in 1926. The young girl in the centre is Raeburne Jones (later Barclay) who was crowned queen of the carnival after raising the most money. She is wearing a crown and long cloak that is draped in front of the group. She and three other girls are holding bouquets. From left to right these three girls are Elsie Royce, Pat Durcle and Leta Rayner. One child sitting in the front is dressed as a jester and several other children are wearing wigs, hats and capes.
See full details