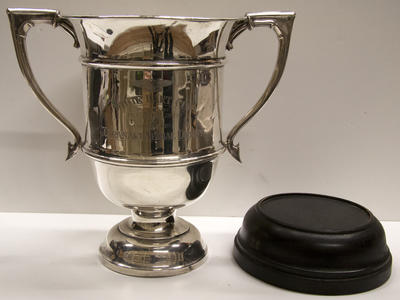 Production date
1933
Description
A large silver plated trophy, the White Hart Cup. The front of the cup is inscribed with " WHITE HART CUP / DONATED BY / MR & MRS T.S JONES / FOR / COMPETITION / TARANAKI AERIAL DERBY ". Above this inscription is a pair of wings with a shield in the middle, with the logo " N.P. AERO CLUB ". The cup was first awarded in 1933, and has been awarded generally annually until 2011, although there are years missing, and the cup was not awarded at all between 1938 and 1950. On the reverse of the cup, the names and years of the winners are engraved. Above the names is the inscription " SNR LANDING ". The cup has two ornate handles which flare out gently at the bottom with an oval decorative disc on each end. The body of the trophy is cylindrical, and is supported by a thick stem and circular base. The trophy sits on a wooden, round base, which has separated from the silver top.
See full details

Credit line
The New Plymouth Aero Club was one of New Zealand's earliest established aero clubs, set up in 1928. Its long history in Taranaki has meant a history of cooperation with both individuals and businesses nearby, including with the iconic White Hart Hotel in New Plymouth. Mrs and Mrs T.S Jones bought the hotel in 1925, and owned it until 1946. Their daughter recalled that Kingsford Smith stayed at the White Hart in 1933, and perhaps it was their influence of this notable guest that encourage the Joneses to contribute this sturdy trophy to reward excellent flying (and landing, if the engraving "Snr Landing" is anything to go by!)