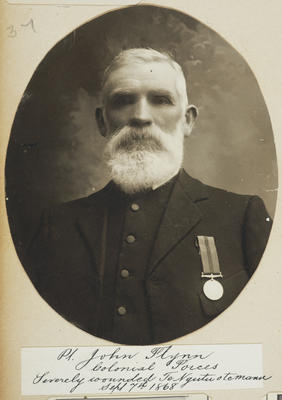 Production date
Circa 1900
Description
Copy photograph of Pt. John Flynn, Taranaki Colonial Forces. Flynn was severely wounded in battle at Te Ngutu o te Manu on 7th September 1868. The photograph is a portrait bust that has been cut into an oval. Flynn is wearing a dark jacket. He has a medal pinned on his left side. He has a white or grey moustache and beard. The photograph is included on page 37 of William Francis Robert Gordon's album "Some "Soldiers of the Queen" who served in the Maori Wars and Other Notable Persons Connected Herewith".
See full details

John Flynn married Mary Jane Hall, eldest dtr of James and Mary Hall, New Plymouth. Flynn drove the coach from New Plymouth to Hawera via the coastal route for some years. His children were well known in Hawera as the Flynn Family Orchestra. He died in 1922.