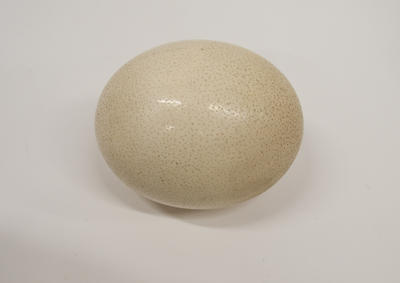 Description
A large ostrich egg. The egg has is hollow and it has a small hole at one end.
See full details

Credit line
A giant rata tree crushed the dreams of a pioneering Inglewood farmer who saw a feathered future for his farm.
This ostrich egg is from the Durham Road farm of John Wheeler who bought two ostriches in 1892 and set aside a couple of hectares to breed them for their feathers.
Within two years the plumes of his birds were drawing praise at the Egmont A & P Show, Hāwera, and the ostriches themselves became something of a local attraction. In 1894 Wheeler reported a “fine clutch” of young birds and with worldwide demand for ostrich feathers at its peak prospects for the venture seemed excellent.
His flock had grown to eight when tragedy struck one night during a storm. The birds were huddling under a large rata which toppled onto them in the high winds. Only one survived. This bird continued to produce feathers but Wheeler’s attempts to rebuild his flock failed and he returned to more conventional farming.