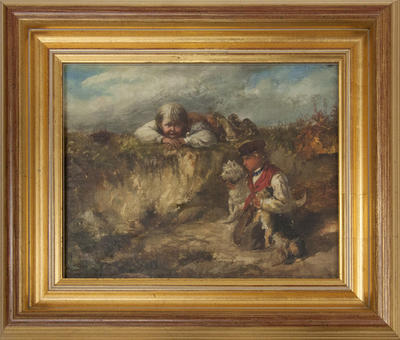 Description
Oil painting showing Edward Frederick Hemingway as a child. Hemmingway was born in Yorkshire in 1823 and came to New Zealand in the 1860s with the 43rd Regiment having previously seen service in the Crimean War, the Indian Mutiny and Malta. He returned to Europe and served with the Red Cross in the Franco-Prussian War. His son Edward "Ned" Hemingway brought him back to New Zealand when he fell ill and he died in Auckland in 1914. Hemingway is shown in the painting as a young boy wearing a white shirt, rust-coloured vest and brown trousers lying on a bank in the grass. In the foreground there is another unidentified young boy wearing a white shirt with a red scarf who is holding two dogs. The painting is in an impressionist style and has a thick gilded frame.
See full details