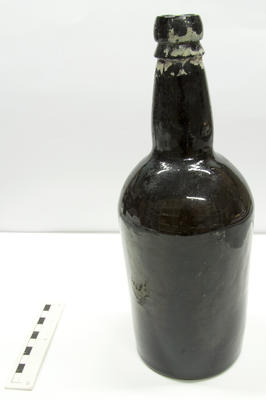 Description
A dark brown glass bottle with a small neck and ribbed mouth opening. The bottle has the remnants of a seal around its neck. This may have been used for sealing the bottle. The bottle was found on the grounds of the New Plymouth Prison on Marsland Hill.
See full details

Credit line
This bottle was found on the grounds of New Plymouth Prison, on Marsland Hill. The New Plymouth prison developed from the military hospital stationed on the site from the 1850s, which was built to treat imperial troops injured during the Taranaki Wars. In 1870 the building was converted to a jail. Until it closed in 2013, it was the oldest operational jail in the country, with the country's smallest cells at 7 x 10 foot cells. Inmates contributed to the local community through construction of roads, hospital buildings and the Moturoa breakwater. Prior to being transformed into the military barracks and hospital, the prison site had once been the Pukaka Pa, a stronghold of Te Atiawa. Little is known about this particular bottle, but its discovery hints at the many people incarcerated at the site and events that took place within the prison walls.