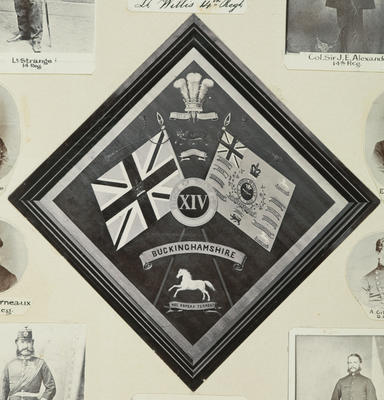 Production date
Circa 1900
Description
Photograph of memorial hatchment for the 14th (Buckinghamshire) Regiment of Foot. The 14th Regiment arrived in New Zealand from Cork, Ireland, in 1860, and remained until 1867. The regiment was present at the siege of Te Arei, and served thereafter in Taranaki. In 1863 it was transferred to the Waikato and took part in the actions at Koheroa and Rangiriri. Detachments fought at Gate pā. The regiment was later stationed at Napier and Whanganui, and formed part of Chute's force in his Whanganui campaign. The hatchment is part of a series painted by Reverend Philip Walsh in 1899, displayed in the Taranaki Cathedral Church of St. Mary. It consists of a Queen's colour or flag with the Union Jack and a central crown, and the Regiment's colour with a Union Jack in the top left corner, "The Prince of Wales's Own" around a central motif with the Prince's crown, and the names of stationed locations. The hatchment also has "Prince of Wales' Own" circled around "XIV" in the centre of the flags with "Buckinghamshire" on a banner below and a white horse with the words "Nec Aspera Terrent" on a banner at the bottom. The painting is square shaped, rotated 45 degrees and appears mounted on a light surface, in a dark-toned frame. The photograph is included on page 24 of William Francis Robert Gordon's album "Some "Soldiers of the Queen" who served in the Maori Wars and Other Notable Persons Connected Herewith".
See full details