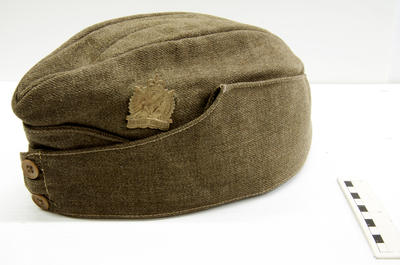 Description
A woollen khaki cap with NZ Cadet Corps badge attached. This cap was worn by Terry Urbahn and his older brothers during their time at New Plymouth Boys' High School in the 1960s and 1970s.
See full details

Credit line
This cadet's uniform was worn by Terry Urbahn and his brothers when attending New Plymouth Boys' High School in the 1970s. Cadet training was a compulsory part of their education during this time period, and Terry recalls doing drills run by the senior students, firing guns at the rifle range, learning survival skills and staying overnight in Egmont National Park. Unlike in the immediate post-war period, by the time Terry was part of the NPBHS cadet corp the focus on the programme was adventure and development focused, rather than a military training exercise. Terry recalls spending 5 days each year doing cadet training at high school, much like an outdoor education camp or similar at schools today.