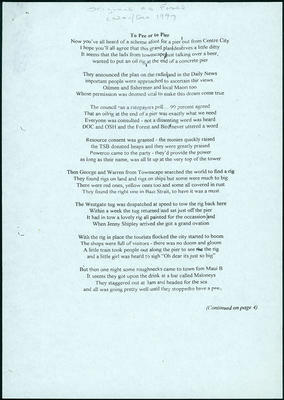 To Pee or to Pier [poem]

Production date
1997
Description
Poem titled ‘To Pee or to Pier’, relating to the 1997 plan to create a tourist attraction from a pier that would be linked to an oil rig anchored off New Plymouth. The satirical poem was distributed by fax throughout New Plymouth in November and December 1997. The author of the poem is unknown.

To Pee or to Pier
Now you’ve all heard of a scheme afoot for a pier out from Centre City
I hope that you will agree that this grand plan deserves a little ditty.
It seems that the lads from Townscape, just talking over a beer,
wanted to put an oilrig at the end of a concrete pier

They announced the plan on the radio and in the Daily News
important people were approached to ascertain their views.
Oilmen and fishermen and local Maori too
Whose permission was deemed vital to make this dream come true

The council ran a ratepayers poll …. 99 percent agreed
That an oilrig at the end of a pier, was exactly what we need
Everyone was consulted – not a dissenting voice was heard
DOC and OSH and Forest and Bird, never uttered a single word

Resource consent was granted – the monies quickly raised
the TSB donated heaps and they were greatly praised
Powerco came to the party – they’d provide the power
as long as their name, was all lit up at the very top of the tower

Then George and Warren from Townscape searched the world to find a rig
They found rigs on land and rigs on ships, but some were much too big
There were red ones, yellow ones too and some all covered in rust
They found the right one in Bass Strait, to have it was a must

The Westgate tug was dispatched at speed to tow the rig back here
Within a week the tug returned and sat just off the pier
It had in tow a lovely rig all painted for the occasion and
When Jenny Shipley arrived, she got a grand ovation

With the rig in place, the tourists flocked – the city started to boom
The shops were full of visitors – there was no doom and gloom
A little train took people out along the pier to see the rig
and a little girl was heard to sigh “Oh Dear, it’s just so big”

But then one night some roughnecks came to town from Maui B.
It seems they got upon the drink at a bar called Maloneys
They staggered out at 3am and headed for the sea
and all was going pretty well until they stopped to have a pee

Well out it gushed from the top of the rig all over Centre City
With rocks and oil and mud and gas the scene was far from pretty
With dollar signs within their eyes, the Council was elated
but Bev Raine changed that with a call “the town must be evacuated”

An urgent meeting was called that night, everyone was there,
the Police the Council and Civil Defence with Mayor Claire in the chair
with oil and gas still gushing out… no one knew what to do
as there were no valves in the rig to shut, they were really in the poo

Then Shagger jumped up and said “hang on… I’ve read about Red Adair,
I’ll blow her up to stop the flow.. this is neither here nor there”
So they all went down to the Farmers’ Co-Op and got some dynamite
they put Shagger in a Firemans suit and he slipped into the night

The oil and gas kept gushing as they looked into the gloom
but then at exactly 4a.m. there was a tremendous boom
The rig was gone … the flow was stopped but the view was pretty shitty
Shagger it seemed used too much and he’d blown up half the City

Another urgent meeting was called to talk about the mess
the bill would run to millions… it was anybody’s guess
But the Council were not worried they couldn’t understand the fuss
“We’ve had a Consultants report, the oil belongs to us.”

Now Shagger was a hero the Townscape boys were knighted
but the Council it turned out to be, were a little bit shortsighted
They didn’t own the oil that day that lay beneath the sea
The liquid gold was in fact owned by Fletcher Energy

Well now we have an oilfield where Centre City used to be
Even from the tallest hill you cannot see the sea
The moral of this tale of mine, is leave things as they be
and when you leave Maloney’s – Don’t stop to have a pee!!!
See full details

To Pee or to Pier [poem]