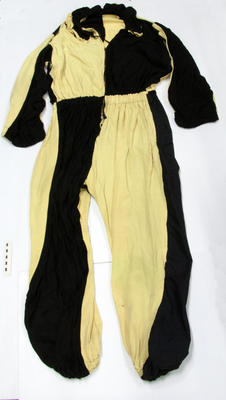 Production date
1957-1964
Description
A set of yellow and black overalls worn as part of Ferdie the bull costume at Taranaki provincial rugby games. The costume was worn by Dave Julian and other Ferdie helpers between 1957 and 1964.
See full details

Credit line
This pair of overalls was worn by Dave Julian in his role of one of Ferdie's helpers. Ferdinand the bull (known as Ferdie) is the Taranaki provincial rugby team mascot, and has appeared in a number of guises since the 1950s. Dave Julian, a New Plymouth barber, recalls acting as both a helper for Ferdie as well as being Ferdie himself as a part of the Ferdie club from 1957 to 1964. "He holds so many memories of some really great times for a lot of people".

Ferdinand first appeared in 1953, mimicking Waikato's mascot "Mooloo the cow". Throughout his life, Ferdinand has been through a number of aesthetic changes. Although the body has been through a few changes, the head remained the same until 2002, made from the skin over an enormous Hereford bull. His head is now on display at Puke Ariki.