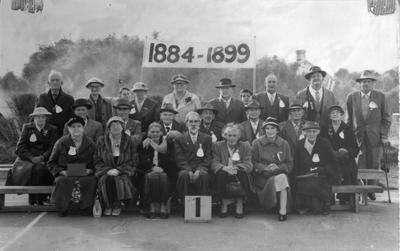 Production date
1959
Description
Copy negative of photograph of a group of 23 men and women seated and standing in three rows in an outdoor setting at the Rahotū Primary School 75th Jubilee. The men and women were students at the school in the years 1884-1899. Some of the men and women are wearing bell-shaped tags on their lapels. A banner behind the group reads "1884-1899" and is being held up by two young boys who can be seen in gaps between the people in the back row. A plaque on the ground in front of the group reads "1".
Back row: The man on the far left is Marc Voullaire, the man standing on the far right with a walking stick is Henry Kitchingman..
Front row: The woman first from the left is Annie Riddell (nee Rothery), third from the left is Peti Lewis (nee Conroy), the woman fifth from the left is Te Huna Rangi (nee Conroy).
See full details

My grandfather Marc Voullaire back row 1st left. His younger brother Charlie also attended but is not in this photo.

- Louise Voullaire-Drake posted one year ago.

Front Row: The woman on the far left is Annie Riddell (daughter of Jacob and Nora Rothery). My grandmother.

Meant to include that Henry Kitchingman was the eldest son of the headmaster of the same name who began at Rahotu in 1896.

The gentleman top right is Henry Kitchingman, 1886-1964 His younger brothers, Arthur and Harold, might have been in the next group photo if they had attended the reunion. Henry was my maternal grandfather.