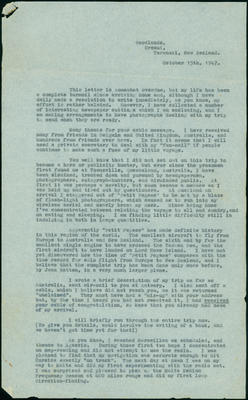 Production date
15 Oct 1947
Description
An eight page typescript copy of a letter written by Harold Newton to Fred Meus on 15 October 1947. A full digital transcription on the letter is available.
The letter was written after Newton conducted a 22 day solo trip in a Ercoupe (a tiny low-wing monoplane from a Belgian company), named ‘Petit Pegase’, from Belgium to New Zealand in 1947. It was the smallest aircraft to ever travel that distance (the trip only completed once before, by Jean Batten), the sixth trip (and smallest engine) to cross the Tasman Sea and the first aircraft to land on Lord Howe Island. Fred Meus, a friend of Newton’s, was a Belgian who Newton had purchased his plane from.
In the letter Newton describes the flight from Belgium to New Zealand. The journey started from Antwerp, and Newton flew in easy stages by way of Marseilles, Corsica, Malta, Tobruk, Lydda, Shiabah, Sharjah, Karachi, Gwalior, Calcutta, Akyab, Rangoon, Penang, Singapore, Pelambang, Batavia (Jakarta), Bali, Koepang, Darwin, Catherine, Daly Waters, Camooweal, Rockhampton, Brisbane, Coff's Harbour and Lord Howe Island, finally finishing the trip in Auckland.
See full details

Hi , we did a short story on the ercoupe a few years back . https://youtu.be/18K7rVBw5Io