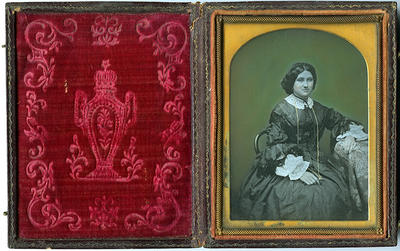 Production date
Circa 1855-1860s
Description
Hand tinted ambrotype portrait of Elizabeth Bosworth (nee Bourns). Elizabeth was born on June 4 1828 in County Mayo, Ireland. In 1847 she married Sgt. William Hancock Bosworth who was stationed in Ireland with the 49th British Regiment. Sgt. Bosworth transferred to the 57th Regiment prior to the Crimea War and the family was posted to India and then to Taranaki in 1861. On retirement from the army Sgt. Bosworth opted to remain in New Plymouth where he became gaoler and governor of New Plymouth prison which he had built using convict labour, while Elizabeth worked as the matron.

Elizabeth is seated and wearing a dress with a lace collar and lace cuffs. One arm is resting on a table covered with a patterned table cloth. She is wearing a choker and a long necklace that has been hand tinted gold. She has a hand tinted gold ring on each hand. Her cheeks have been tinted pink and the background is tinted green. The ambrotype is surrounded by a plain gold metal mat with a patterned metal edge and is contained in a dark brown case with an embossed lid. Gold paint patterns adorn the inside edge of the case. The lid of the case is lined with embossed red velvet. Two clasps are mounted on the right hand side of the case.
See full details

Hi Sheila, Can you please email me at carrickc@npdc.govt.nz - I have been trying to reply to your enquiry but the email address we have seems to be incorrect. Chanelle (Curator Pictorial Collections at Puke Ariki)

This lady is my gg-aunt, Elizabeth Bosworth, nee Bourns, b. June 4 1828, wife of Sgt. William Hancock Bosworth of the 57th Regiment...his identified photograph in an identical case is also in this collection. I recall these pictures (now lost) from my childhood in Mrs Bosworth's native county Mayo, Ireland . They married in her native parish while Sgt. Bosworth was stationed there with the 49th Regiment - he transferred to the 57th prior to the Crimea War. Thereafter, the Bosworth family were posted to India with the 57th and thence to NZ in 1861. I have written a history of the Bosworth and Bourns families I'll be happy to deposit with the Archive. Is it permissible to download said pictures? Regards, Sheila Arthur