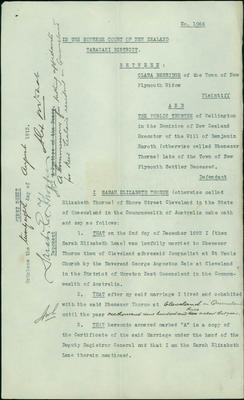 Production date
1913
Description
Documents pertain to a case filed by a widow (Berridge) against the Public Trustee acting as the Executor of the Will of Benjamin Enroth (otherwise called Ebenezer Thorne), settler, deceased. The plaintiff is a widow of the deceased, whom she knew as Enroth. She wishes property and money she transferred to the deceased to be returned to her as she claims the deceased falsely represented himself as her husband as he was already married to another woman (S. E. Thorne). Includes the following: information on land in the Fitzroy District and sums of money transferred from the plaintiff to the deceased; an affidavit of S. E. Thorne; a marriage certificate for the marriage between E. Lane and E. Thorne; a marriage certificate for the marriage between C. Berridge and B. Enroth; E. Thorne's cheque book; three photographs of Thorne; judgment papers; information on the dates of the deceased's marriages; a brief account of Enroth's relationship with the plaintiff; a brief summary of cases in which lawful claims were made to fraudulently acquire property; a diary (presumably the deceased's) with accounts, daily Bible Studies, information pages and advertisements; an account of the plaintiff's costs; an account of the defendant's costs; memos for a new will for Enroth; a copy of the will of Benjamin Enroth; a series of letters written to the plaintiff by the deceased; a certified copy of the transfer documents between Clara Enroth and Benjamin Enroth; a sketch of property on the corner of Devon Street and Belt Road with buildings noted; search notes, and a letter from the public Trustee relating a claim from a Mr. H. H. Earle in Bideford, England whose mother was also married to the deceased.

The judge remarks this is the first instant of a question of a lawful claim to fraudulently procured property in New Zealand.

Note: Includes a print of a photo of Clara Berridge and family donated by Allan & Pam Davies, 2013.
See full details