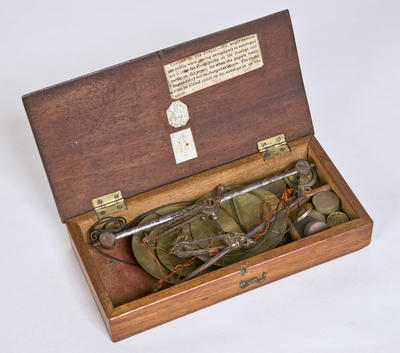 Description
A flat, rectangular wooden box, with a brass hook and eye catch. Newspaper clipping adhered to inside lid reads " CAUTION TO THE PUBLIC - We would caution / the public when posting newspapers in envelopes / not to stick the stamp partly on the envelope and / partly on the paper, for when the papers reach / England they will be charged as letters. The stamp / must be placed either on the envelope or on the / paper". Two white Wilson Crest seals which feature a talbot's head read " Semper Vigilans ". The box originally contained two brass balance scales and fifteen small weights. Some of the weights are marked " Apothecaries Weights " and some are marked "Two Drams" with a crown.
See full details