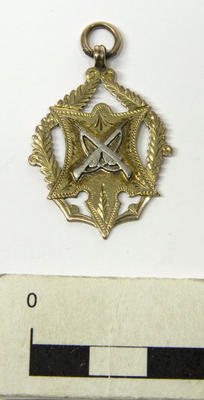 Credit line
This shooting prize was issued by the Cheltenham Rifle Club. According to the club's website it " was formed in 1897 and has been shooting on the same range since. The range is located on the property of John & Diny Dermer approximately 2km west of the Cheltenham Hotel. on State Highway 54, on the northern side of the road and the entrance is just before the Kiwitea Stream Bridge. " See: http://www.gderb.net/cheltenham2627/crc_policenotice.htm