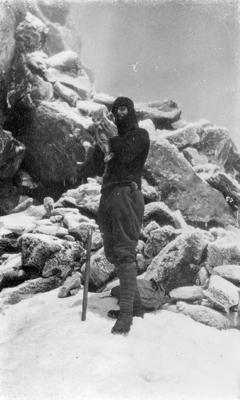 Ginger the cat and Harry Williams on Mount Taranaki

Production date
Unknown
16 Jan 1917
Description
Copy photograph of 1917 original showing Harry Williams holding his cat Ginger in the snow-covered summit of Mount Taranaki. Harry wears climbing gear and a balaclava. Harry's pack and ice pick rest in the snow at his feet. Snow-covered rocks are visible behind the pair. Ginger lived at the North Egmont Mountain House on Mount Taranaki and was the first feline to climb unaided to the Mountain's summit on the 16 January 1917 when he followed Mountain Guide Harry Williams and a group of five women trampers up the mountain. Harry Williams was Manager of the North Egmont Mountain House at that time.
See full details

Ginger the cat and Harry Williams on Mount Taranaki