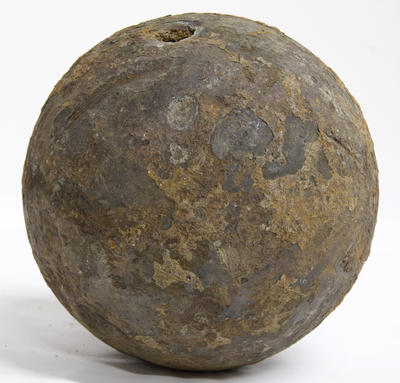 Production date
Circa 1860s
Description
An eight inch (20cm) rusted cannonball which weighs approximately 20 kilograms. A fuse hole is evident on the cannonball which is also covered in surface rust.
See full details

Credit line
This cannonball, thought to have been associated with one of two eight inch naval guns used by the British Army during the Taranaki Wars was unearthed on farmland off Pennington Road, Waitara by Troy Hawkins who was carrying out excavations as part of groundwork on the property. The guns were used in various engagements during the wars and according to William Irwin Grayling, were used to bombard Puketakauere pa in the days after the British defeat there on 27 June 1860. See The War in Taranaki p.36 on the Early New Zealand books project by the University of Auckland Library. http://www.enzb.auckland.ac.nz/document?wid=2055&page=0&action=searchresult&target=
Military historian Richard Taylor, writing in his thesis British Logistics in the New Zealand Wars 1845-66 notes the transport challenges these weapons posed. "Throughout the war, the army's transport requirements were far in excess of the capacity of the limited numbers of draft animals and carts available locally. For example, the two 8-inch naval guns used by the British during the second half of the war each required a team of 18 bullocks, as well as those required for the limbers. The British initially met their land transport requirements by leasing bullocks and carts from local settlers, contracting civilians as carters, or occasionally impressing carts for short periods of service."