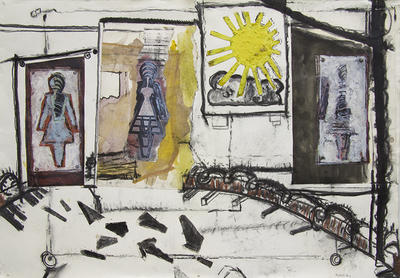 Production date
1994
Description
Mixed media artwork focussing on the female body and its containment within the domestic sphere. The artwork features three female shapes - described by the artist as "insubstantial female toilet signs" - that are rendered in shades of pink, blue, green and red. Each one is painted on a separate piece of paper that is adhered to the paper support. This creates a play between two and three dimensional space. Two of the female shapes also feature a partial target over their bodies. Each female figure is contained within the confines of a box or delineated space. Numerous charcoal lines are drawn around the figures and around the subject matter in general, further emphasising the sense of interior space. Near the centre of the image a bright yellow cut-out sun, textured with paint and wax, floats within a box and partially covers a cloud. Coils of barbed wire, drawn in charcoal, sweep across the bottom half of the artwork. Page fragments from a South African phone book are adhered bottom left of the artwork. They have been painted black and represent bricks. Painted areas of the artwork are heavily textured. "Partly Cloudy" explores sexism and gender stereotyping in South Africa's patriarchal society.
See full details