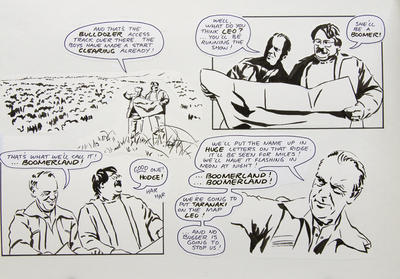 Production date
1985-1987
Description
Twelve episodes from Graham Kirk's comic strip "The Stone of Glotte". The comic strip centres around a magical rock known as the Glottestone and a cast of Kirk-invented characters including reporter Dick Sargeson and evil herbicide baron Jeremy Hodgekiss. "The Stone of Glotte" was the second storyline in Kirk's Dick Sargeson comic series. It ran in "The Listener" magazine for roughly 70 episodes in the mid 1980s. The pages document the first stage of Kirk's comic strip making process and consist of hand-drawn figures and text with some photocopied elements. The pages feature several icon Taranaki landmarks and locations including the White Hart Hotel and the Hawera Water Tower.
See full details