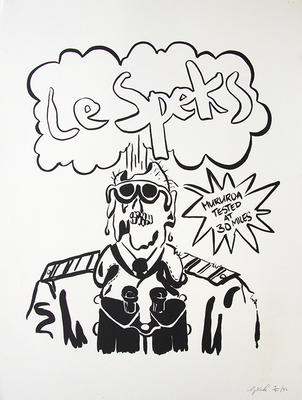 Production date
1984
Description
Screen print depicting a skeleton figure with a mushroom cloud emanating from its head. Inside the cloud the words "Le Speks", a reference to the French sunglasses brand Le Specs, are written. The figure is wearing a military uniform, a pair of sunglasses and has binoculars around its neck. The words "MURUROA TESTED AT 30 MILES" feature in a star shape on the right of the image. The screen print refers to French nuclear testing on Mururoa Atoll from 1966-1996, which resulted in 41 atmospheric tests, 137 underground tests and 15 'safety trials', leaving a legacy of nuclear contamination and environmental concerns.
See full details