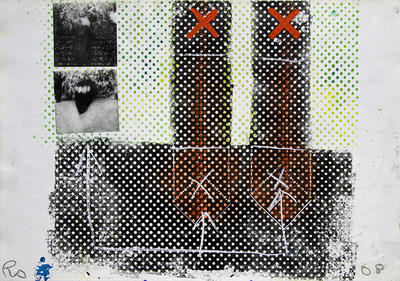 Production date
2008
Description
Depiction of the World Trade Center Towers and their foundations. The towers and the surrounding earth are painted black. Two white X's mark the points in the foundation where, according to alternative viewpoints on why the towers collapsed, explosives may have been planted. Two large red X's are also painted on the towers and red paint extends up the length of the towers from the foundations, indicating perhaps both the structural cores of the buildings and the progress of the explosions. Several arrows point to both the explosives in the tower and at two frames printed on the left of the image. The images in the frames are indiscernible but may indicate surveillance, grainy television or night vision images. The artwork features hundreds of small dots, which are used to suggest pixellated media images. The artwork questions who controls information about world events.
See full details