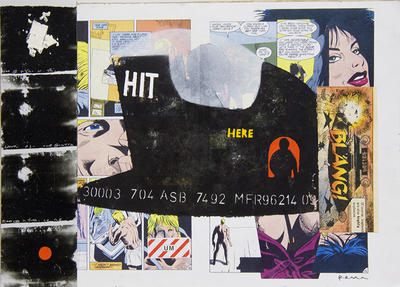 Production date
Circa 2003-Circa 2005
Description
Collage of comic book elements and painted elements. A black military aircraft with the silhouette of a pilot is printed over a comic book page. The bottom of the aircraft shows a string of white numbers and letters that refer to the code printed into a piece of metal retrieved from an American missile dropped on a residential area of Baghdad, Iraq, in March 2003. The missile killed dozens of civilians. The words "HIT HERE", stencilled in white and yellow paint onto the body of the aircraft, refer to targets attacked by the US military. Also on the body of the aircraft, a figure is silhouetted against a red outline. On the left of the image, a vertical frieze of paintings has been glued to the comic book page. The images are virtually indistinguishable, perhaps reminiscent of CTV or night vision images. The bottom frame in the frieze features a red dot, which represents the laser dot of a sniper's gun. On the right of the image another piece of comic has been glued on separately. It depicts a space ship shape in an explosion, with the word "BLANG!" in capitals. The text in the frame reads: "Of course, bugbomb are also highly explosive." A white sticker with red diagonal lines and the letters "UM" is also adhered beneath the aircraft. The collage is from Morris' 'Enduring Freedom' series, which explores differing version of truth surrounding the September 11, 2001 'terror attacks' in the United States of America.
See full details