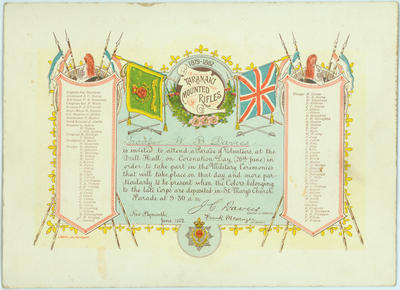 Production date
1864-1902
Description
A collection of papers belonging to William Bolland Davies.
Davies was a keen horticulturalist and seedsman with property on Frankley Road. He married Arabella Belinda James on 19 August 1878 in Auckland; she had immigrated from Nova Scotia and was a daughter of notable Auckland orchardist Captain Robert James. Together they had 6 children: Blanche Gertrude (b. 1879), Robert William James (b. 1881), Lawrence Ernest (b. 1883), Mary Louisa Amelia (b. 1885), Victor Caddy (b. 1887) and Ben Stanley (b. 1890).
William enlisted in the Taranaki Light Infantry Volunteers in 1865 where he served as a bushranger and as a trooper with the Taranaki Mounted Rifles; he was also present at the capture of Te Whiti in 1881.

Full transcript and digital copy of Davies' 'Reminiscences of the [18]50’s + 60's in Taranaki' is available.
See full details

Receipt. For one pound sterling for attending evening school. 21 March 1868.

Appendix P. To certify that Private Wm. Bolland Davies has been struck off the Muster Roll of the Light Infantry Volunteer Corps at his own request. 22 May 1869.