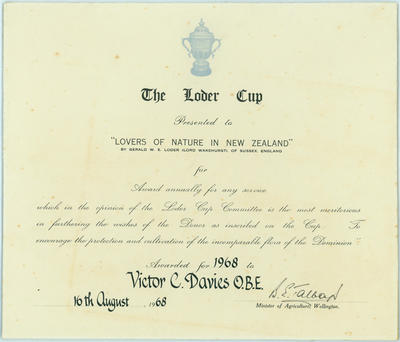 Production date
1909-1978
Description
A collection of papers belonging to Victor Caddy Davies. The papers mainly relate to his time serving with the New Zealand Army in World War One, as a sergeant in the 3rd New Zealand Rifles Brigade in France (1918) and as a warrant officer with the army of occupation in Germany, as well as his achievements with his company Duncan and Davies Limited and in the national and global horticulture industry.
See full details

3. Certificate. “George the Fifth, by Grace of God, of the United Kingdom of Great Britain…” Victor Caddy Davies appointed Officer in the Land Forces of the Dominion of New Zealand, discharged as 2nd lieutenant, 17 December 1918.

24. Correspondence. Department of Justice to V.C. Davies. Re. name placed on the Commission of the Peace for the Dominion of New Zealand, 29 July 1937.

29. Awards made by the Council of the Royal Horticultural Society. Includes V.C. Davies for the Veitch Memorial Medal, 8 December 1966. 2pp.

37. Notes and dried plant clippings. "New varieties of ferms at Kew. Selected by V.C. Davies" [collected while on active service during WWI]. 30 January 1918.

38. Note, receipt for accommodation at YMCA and dried plant clippings [collected while on active service during WWI]. 12 February 1918.

39. Note and dried plant clippings [collected while on active service during WWI]. Undated.