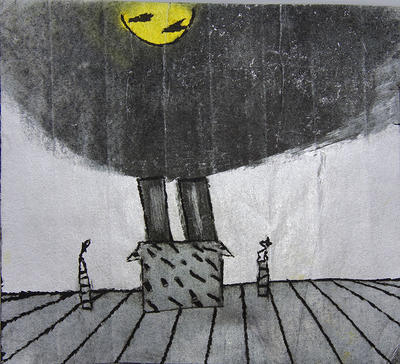 Production date
Circa 1996-Circa 1997
Description
Artwork from Roger Morris' 'The Defined Levels of Decline' series, which examined the quality of water in Stratford, Taranaki. The artwork is created on reflective aluminium thermal foil used in the construction industry and is rendered predominantly in black and grey. It shows the Stratford Power Station spewing black smoke into the sky. The cloud of smoke threatens to obscure the sun, which is depicted at the top of the artwork in bright yellow. Morris made a submission against the expansion of the Stratford Power Station, which took water from the Patea River to cool equipment in the Taranaki Combined Cycle plant.
See full details