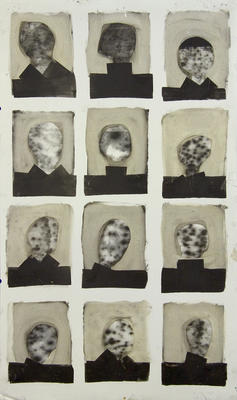 Production date
Circa 2007
Description
Artwork from Roger Morris' 'Enduring Freedom' series that evokes the anonymous casualties of war. The artwork is made up of twelve panels that feature faceless heads, depicted in such a way as to make them virtually indistinguishable from each other. They are rendered in blacks and greys. The artwork was inspired by the casualties of war remembered by various war memorials around the world. Morris sees them not only as dead, but also hopeful and humorous.
See full details