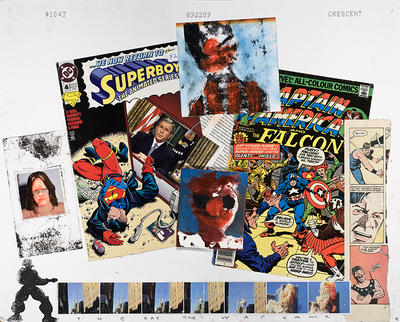 "The day the war came"

Production date
2001
Description
Collage highlighting what Roger Morris sees as the "comic book nature" of the events that took place on 11 September 2001 in the United States of America. The collage is made up of both readymade elements and handmade elements. It features two comic book covers, one of "Superboy" and one of "Captain America and the Falcon". The "Superboy" cover has been cut up and a page of text, including a photograph of George W. Bush, has been inserted underneath so it appears as if Bush's face features on the magazine cover. Part of another comic strip is adhered to the right hand edge of the artwork. Two hand painted depictions of clowns are glued to the centre of the collage. Morris describes these faces as being "the face of madness". They both have large red noses and red smiles. A composite image of an action figure's head and George W. Bush's face, created by Morris in Photoshop, is glued to the left hand side of the artwork. It is glued onto another collage element that features two hand drawn faces and black ink. Beneath, a figure holding a gun has been printed in black paint. Along the lower horizontal edge, a frieze featuring seven images of an aeroplane flying into one of the World Trade Centre towers has been glued down. The words "THe DAY THE WAr came" are handwritten beneath it.
See full details

"The day the war came"