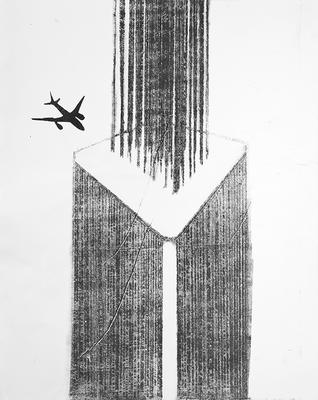 Production date
Circa 2008-Circa 2009
Description
Artwork based on a graphic produced by the National Institute of Standards and Technology (NIST) in the United States of America to explain how the World Trade Centre towers fell without the aid of explosives. The artwork depicts one of the World Trade Centre towers with lines emanating from the centre of the tower, indicating the tower's core strengthening columns. An aeroplane is pictured on the left of the image prior to impact. Roger Morris considers NIST's explanation of the towers' collapse to be "creationist", overlooking other factors in the buildings' collapse.
See full details