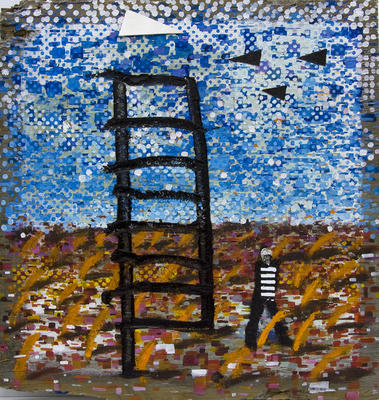 Production date
Circa 2004-Circa 2005
Description
"Post 9/11 Landscape" highlights the way the media and government authorities mediate and control our view of world events. The painting depicts a figure standing next to one of the World Trade Centre towers. The figure has five white stripes on its body and is wearing a helmet. It is a symbol of authority. Four triangle shapes depicted in black and white in the sky represent aeroplanes and/or bombs. The landscape and sky areas of the painting are made up of blue, orange, red, white, purple, yellow and brown dots and dashes. They allude to the way our view of the world is constructed from pixelated newspaper and television images of international events. It also references how the level of filtering, mediation and control of information by Western media and governments has increased after the 11 September 2001 'terror attacks' on the United States of America.
See full details

Material
Oil on Board
Cardboard