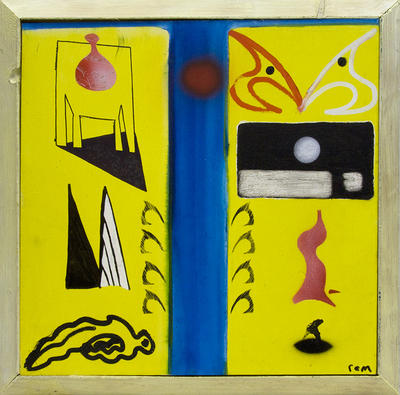 Production date
Circa 1999-Circa 2000
Description
Framed oil on canvas that explores a range of subjects. A blue line, which represents a river, divides the composition into two halves. A 'cancerous' red dot is present in the river near the upper horizontal edge. The background of the two halves is painted in bright yellow. The top left of the composition features a television shape with a red/pink vase decorated with Roger Morris' symbol for fascism (the symbol is based on the stylised shape of a figure holding a gun). A line of four facsist symbols are repeated below. The two triangle shapes beneath the television represent a cattle ramp. A figure with its hands tied behind its back is pictured below. The figure takes its inspiration from the first dead body Roger Morris encountered when he was a policeman. Top right of the composition features two fascist symbols facing each other, which creates a kind of stylised Māori face. Beneath is a night landscape with the moon. Four fascist symbols mirror the four on the opposite side of the composition. Beneath the night landscape is a simplified shape in red/pink that represents a carcass. Bottom right of the composition shows a figure standing in a black oval.
See full details