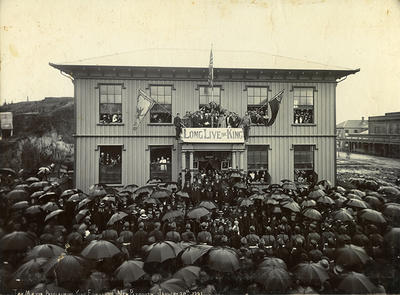 Production date
28 Jan 1901
Description
Album page with a photograph adhered on both sides. The first photograph is of a large crowd of people gathered outside the Provincial Council Chambers on Brougham Street, New Plymouth in the rain. Many of the people are holding opened umbrellas. More people are at the windows of the building and atop the portico of the entrance. The mayor of New Plymouth, Edward Dockrill reads a proclamation to the crowd from the portico. The chambers building is decorated with flags including the New Zealand flag and Union Jack. A banner on the portico reads "Long Live the King". The photograph on the other side shows the interior of an unknown church.
See full details

I believe the Mayor at this time was Edward Dockrill (see his picture included amongst those of other Councillors) He was the son-in-law of my gg-aunt and uncle, Sgt. William Hancock Bosworth and his wife Elizabeth, nee Bourns, (Jailor & Matron of New Plymouth Prison whose pictures are also included in your Archive. Edward Dockrill's wife was Elizabeth Bosworth. She died in London where she took up residence with their surviving son, Dr. John Stuart Dockrill, following the death of her husband.