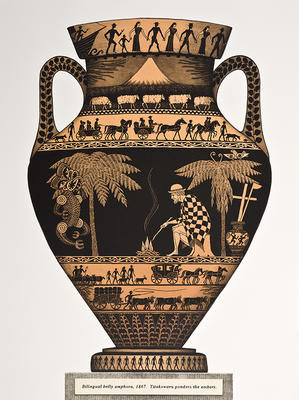 Production date
2009-2010
Description
Lithograph depicting a Greek belly amphora decorated with scenes relating to the Taranaki Wars (1860-1866) and Tītokowaru's War (June 1868 to March 1869). All the figures represented on the amphora are in Greek style. The main frieze on the body of the amphora shows Riwha Tītokowaru sitting on a tree stump while prodding the embers of a fire with a stick. He is wearing a hat and chequered blanket. He is framed by two ponga trees. A bird with wings depicted as stylised eyes sits in the tree behind Tītokowaru. Behind that tree another Greek vase sits on the ground holding a tewhatewha and a cross. A taniwha figure is pictured in front of the opposite ponga tree. The friezes above the central image show settlers arriving on ships and pulling carts in convoy, a line of sheep and Mount Taranaki. The friezes below the central image show more processions of settlers arriving with carts and goods.
See full details