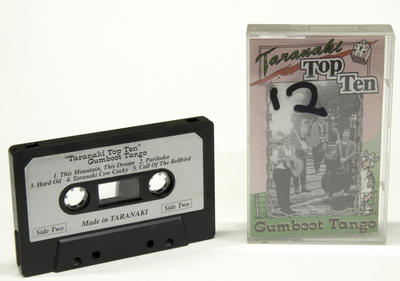 Production date
Jan 1995
Description
An audio tape titled Taranaki Top Ten. Side One of the tape features the tracks " Gumboot Tango " " Up the Mangapapa " " Small Town Taranaki Blues " " Taranaki " and " Taranaki Boys ". Side Two features the tracks " This Mountain, This Dream " " Parihaka " " Hard Oil " "Taranaki Cow Cocky " and " Call of the Bellbird ". The sleeve features a a black and white photograph of the band, from left Mike Harding, Alan Muggeridge, Janet Muggeridge and Steve Muggeridge. " Taranaki / TOP / TEN / Gumboot Tango " is marked on the cover which features a red and green background with a cartoon fence and cow. The band photograph is framed with a barbed wire design. The sleeve features extensive album credits, track listings and information on the original artists of many of the tracks. The interior of the sleeve features a green stylised mountain. " TARANAKI TOP TEN / GUMBOOT TANGO / Tales of Taranaki in song- 'from Patea to the Mokau, Tahora to the sea' brought to you by local combo GUMBOOT TANGO ( Mike Harding, Alan, Janet, and Steve Muggeridge). / With incentive provided by the 1995 Taranaki Festival of New Zealand Arts, Mike Harding, New Plymouth singer and music enthusiast, and Alan Muggeridge, South Taranaki singer/songwriter and Rowan Studio owner- operator, set out to find, rehears and record ten truly local songs. The tracks on the resultant cassette, " TARANAKI TOP TEN ", range from the McCartie tale of shearing up the Mangapapa in the late 1940's to Tim Finn's tribute to Te Whiti and Parihaka. / With "TARANAKI TOP TEN" Gumboot Tango tell something of the story of Taranaki observing, with some rustic humour, characters such as the Taranaki cow cocky at work, at play and in courtship, the novice shearer, the old worker and the friday night, small-town hoon. Above all this stands Mt. Taranaki, the feature that gives the province its own special cultural and spiritual heart. The members of GUMBOOT TANGO are all from and of Taranaki, bringing to their performance of these and other Kiwi songs an infectious delight and sincerity, evident in recording and in the live show based on the " TARANAKI TOP TEN". "12 " is handwritten in black marker on the base.
See full details