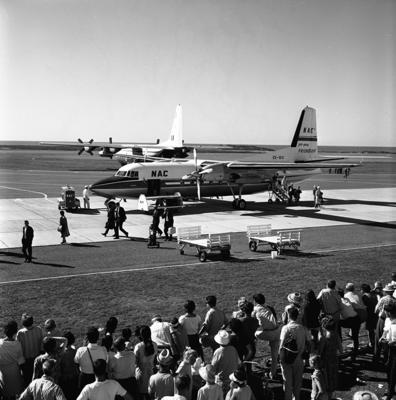 Production date
04 Mar 1967
Description
Passengers disembarking from a New Zealand National Airways Corporation aeroplane ("Kotare") on the opening day of the New Plymouth Airport, Brown Road, New Plymouth. A crowd of onlookers is pictured in the foreground. A second aeroplane is visible behind the aircraft. The new airport - which replaced the original airport opened in 1933 - became operational on 14 November 1966. However, it was officially opened by the Right Honorable Keith Holyoake, Prime Minister of New Zealand, on 4 March 1967. The opening featured a large display of aeroplanes, including commercial and specialist aerobatic craft.
See full details