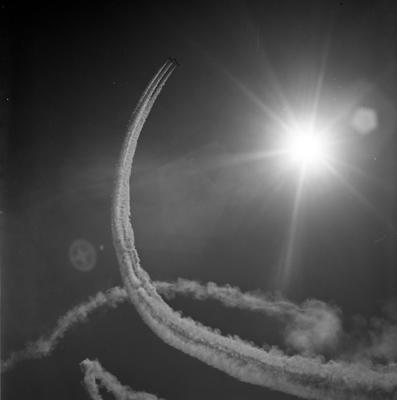 Production date
04 Mar 1967
Description
Three aircraft making smoke trails during an aerobatics display, opening of the New Plymouth Airport, Brown Road, New Plymouth. The photograph is taken looking directly into the sun, which has created a starburst shape on the right of the image. The new airport - which replaced the original airport opened in 1933 - became operational on 14 November 1966. However, it was officially opened by the Right Honorable Keith Holyoake, Prime Minister of New Zealand, on 4 March 1967. The opening featured a large display of aeroplanes, including commercial and specialist aerobatic craft.
See full details