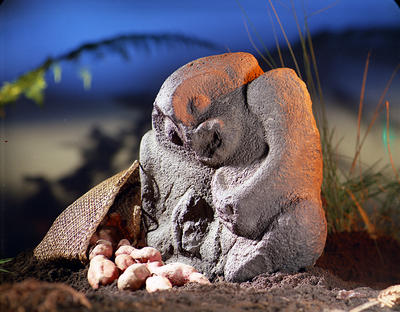 Production date
Sep 1969
Description
A carved Māori statue representing Hine o Tanga, a renowned chieftainess of Puke Hoe pā, Nga Mahanga hapū, Taranaki tribe. The statue is arranged on a fake beach setting with a kete/basket of kumara. The photograph was taken to be included in a calendar published in 1970 by Ivon Watkins Dow, the agricultural chemicals company. Hine o Tanga defended Puke Hoe pā against an attack by an enemy war party. This statue is often incorrectly portrayed, as in this instance, as a representation of a kumara god.
See full details