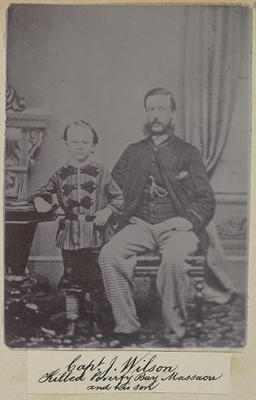 Production date
Circa 1900
Description
Copy photograph of a studio portrait of Captain J. Wilson and his son. Wilson is seated on a chair and is wearing civilian clothes. His son is standing next to his chair and is resting one arm on a table. Studio props are visible in the background. Captain Wilson was killed in the Poverty Bay Massacre, Gisborne District, on 10 November 1868 by Te Kooti and his forces. A son survived the massacre, but it is unclear if the survivor was the boy pictured in this image. The photograph is included on page 16 of William Francis Robert Gordon's album "Some "Soldiers of the Queen" who served in the Maori Wars and Other Notable Persons Connected Herewith".
See full details