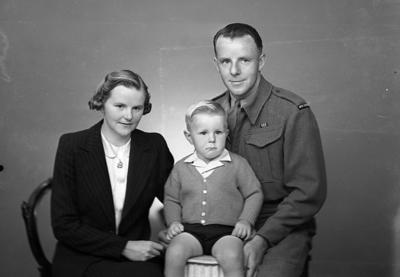 Leslie is wearing his serviceman's uniform, having just returned from service in the Middle East. Norma and Leslie married before he left in 1940, Bryan was born while Leslie was overseas. They went on to have eight children.

Leslie joined the NZ Police in 1944, serving in Auckland and New Plymouth until his death. Bryan also joined the Police, but was shot dead in Lower Hutt aged 21.
See full details

This was taken when my father returned to NZ in 1943. He had enlisted and sailed to the Middle East in 1940. My parents married before he left for overseas and Bryan was born on 8 May 1941. My parents went on to have 8 children. Tragically Bryan was shot and killed at Lower Hutt on 3 February 1963. He had joined The NZ Police Force as a 17 year old cadet. He was 21 years old. Dad joined the Police Force in 1944 and served in Auckland and New Plymouth until his death in 1985. He was 69 years old. My mother lived to the age of 92 and died in 2013. May 1941