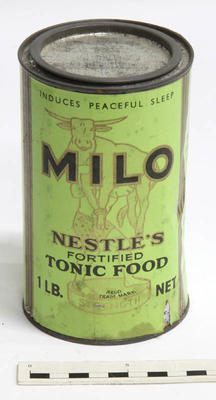 Production date
Circa 1940s-1950s
Description
A 1lb Milo tin with a lift off lid. The tin features a green paper label with man carrying a cattle beast on his shoulders and standing on a pedestal. Two other panels on the label give preparation instructions and detailed ingredients. The tin is empty.
See full details

Credit line
This tin of Milo was among the stock at Wai & Yep and Co. General Store on the corner of Tasman and Havelock Streets, Opunake. The store closed in 1977 and the building, known as Yep's Corner, was demolished in 1986. Puke Ariki researcher Ron Lambert was able to sift through the remnants of the once-thriving store.
"There was an incredible amount of stuff lying around the place, as I remember it," says Ron, who at the time was director of the Taranaki Museum. "We were called in because someone thought there could be some interesting historical material there."
"We had a bit of a look around and saw there was certainly some manuscript material and general commercial papers and a lot of them were in Chinese. If I remember rightly, it was only the first generations of the family who maintained the account books in Chinese," Ron says.
Also among the rubble were posters for fireworks, a few simple pairs of Chinese trousers and long tops. "There wasn't quite as much Chinese-oriented material as I had hoped."But there were some Kiwi classics. "We got a huge pile of unopened Edmonds Baking Powder tins, which we still have in our collection." Ron says.
A TSB Bank and a community library now stand on the store’s old site.